Picture a time at the beginning of the twentieth century. Thoughts of the Industrial revolution are still in our thoughts and the “Old West” was a mere 20 years ago. Teddy Roosevelt is our president and we are constantly amazed at the modern technical marvels that surround us. Radio is broadcasting for the masses for the first time. The first powered flight by the Wright brothers has just taken place. Automobiles are becoming more affordable and we are all thinking of getting rid of our dirty stinky horses and replace them with dirty stinky Model As.

Here in the North Shore, we are all anxious to have the brand new Chicago Elevated Train bring service to this small town that was little more than a wooded frontier town next to the farmland town of Gross Point. And yet, among the technological advances and growth of this area, local Freemasons feel the need to start a lodge here and to add to the strength of this growing community providing a way for guys to get together and contribute to its success.

During the summer of 1907 a paper was left in the drug store of C. E. Renneckar for the signature of Master Masons residing in Wilmette who were desirous of having a Masonic lodge in the village. As result, a small group of Master Masons gathered together with Charles A. Coxe at his home on January 9, 1908, to determine if it was advisable to organize a Masonic lodge or club in Wilmette. 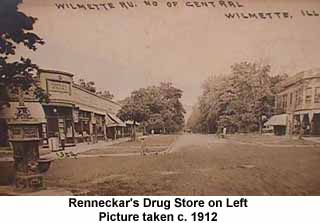 All present agreed that there were enough Master Masons to form a local lodge and thus, the first real step was taken toward forming Wilmette Lodge 931, A.F. and A.M. Shortly after the first meeting held in the Coxe home, a Masonic club was organized for the purpose of securing a dispensation as a lodge from the Grand lodge. 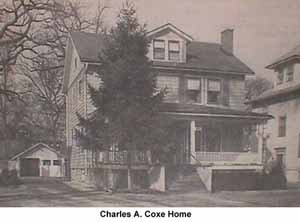 This club met periodically in the Jones building but was unsuccessful in securing the required recommendation from three neighboring lodges. The club was reorganized and through the efforts of George Hess, waivers for a new lodge were secured from Evans Lodge No. 524; A. O. Fay lodge in Highland Park and Des Plaines lodge in Des Plaines. Then on September 22, 1910, this small group of Masons, now enlarged, petitioned the Grand Lodge of Masons of the State of Illinois for dispensation as a lodge, with a result that Wilmette lodge, A.F. and A.M. was instituted, October 28, 1910. The Master of the lodge was Mr. Hess. 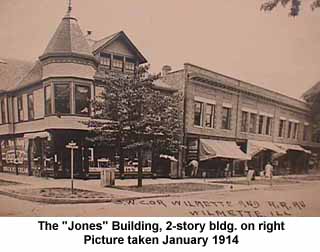 The lodge first convened in the Jones building on Wilmette avenue at Green Bay road. The same building that Millen’s Hardware is now. You can still see the stained glass transom that reads “Lodge Hall” over one of the doors.  But later, the lodge moved to the third floor of the Brown building at 1159 Wilmette avenue, where they found a meeting place for several years. 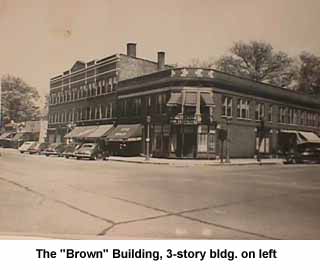 The brethren decided it was time to build their own building to serve the growing functions of the lodge. The building was built using the strength of horses and pulleys and with the determination and perserverance of men who desired the need to erect more than a building… a monument to house the functions of a fraternity dedicated to making the local community a better place for all. Early in September 1926, the building was completed and the move was made to the Wilmette Masonic Temple at 1010 Central Avenue. The architect was Arthur Knox who was known to be in the circle of architects of such notable people as Dwight Perkins, Louis Sullivan and Frank Lloyd Wright. Knox designed many of the Masonic lodges around here including the Lawndale and South Chicago Temples. On that day in early fall of 1926, a celebration was held that drew hundreds of people around the community. Dignitaries from the village of Wilmette and the local towns participated in the celebration. Bands played music while newspaper reporters gathered quotes for their columns. The Grand Master of Illinois and his officers conducted the dedication ceremony and all had a night of dinner and dancing in the main auditorium.

Since the time the lodge was built, Freemasonry grew tremendously. Many lodges were formed. However, the 70s were a difficult time. Declining membership due to increased participation in health clubs, sporting activities, travel, longer work hours and many other activities occupied the primary interests of modern man. Hence, lodges did not have the membership to actively operate so many lodges. Lodges started to consolidate. 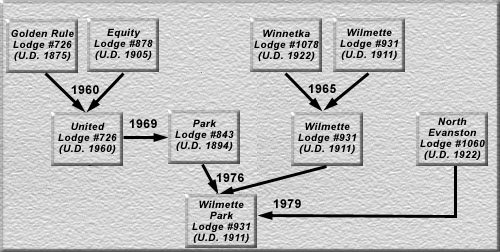 Today this lodge is involved with community work for the Village of Wilmette, the children’s homes in La Grange and Murphysboro, and many other philanthropic activities. Many of our members belong to the Wilmette Chapter No. 253 Royal Arch Masons who contribute to the success of research and treatment of autism. And many also belong to the Medinah Shrine whose hospital in Oak Park is one of the finest orthopedic and neuromusculoskeletal care centers in the world.

To this lodge and its members over the past 100 years, thank you for your care and efforts to make this community a better place. And Godspeed to this lodge for the next 100 years.

Many thanks to the Wilmette Historical Museum, Brothers John Tompary, Ed Rund, Ed Coussens and Jack Coussens for providing information and photos for this article.